ESPN honored sixteen schools for their commitment to high standards of inclusion through the Unified Champion School model. 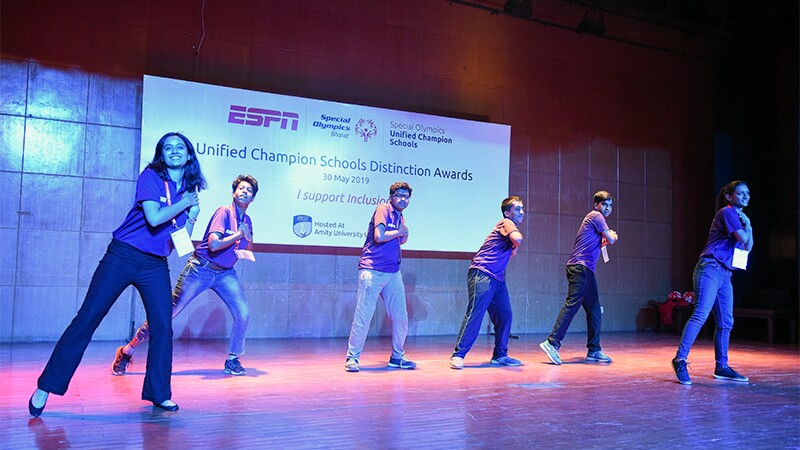 New Dehli, India – Over 200 Youth Leaders gathered from over 20 states to take part in Special Olympics Bharat’ s first National Youth Summit. At the conclusion of the summit, 16 schools received recognition from ESPN and Special Olympics as the country’s first group of Special Olympics Unified Champion Schools of Distinction.

In order to become a Unified Champion School of Distinction, each of the sixteen schools committed to five standards of excellence outlined by Special Olympics Bharat in four categories: Unified Sports, Inclusive Youth Leadership, Whole School Engagement, and School Outreach. These standards include hosting training workshops for coaches in Unified Sports, establish an on-going Unified club or program, engaging with the whole school on the movement of Special Olympics, and finally conducing outreach and onboarding of a local school to bring in as a Unified School.

“There are 700 million people under the age of 25 in India. We have great potential in this country, and it starts with you. It is the youth who are going to take this program forward to society.”

Building upon this call to action, Youth Leaders had the opportunity to hear about the power of their voice in promoting inclusion by an esteemed group of panel speakers. One of the panel speakers, Alexandra Westerbeek, Chief Communications Officer for UNICEF India told the group, “It is your right to be part of society so go and claim your rights.”

Anjum Chopra, former Indian women’s cricket team captain, joined the momentous event with a candid interview by ESPN India reporter, Debayan Sen. In the interview she said to the Youth Leaders and mentors, “Inclusion is not easy and it requires a lot of work, but as young people in India you can help set this standard.”

ESPN India reporter, Debayan Sen added, “Sport is the ultimate unifier and inclusion is very central to ESPN’s existence so it feels very natural to be here.”

Following the interview, sixteen schools were called up to the stage to receive a plaque distinguishing them as a Unified Champion School of distinction. In addition to that, each of the youth leaders representing the school were given a certificate that recognized their efforts in each of the categories.

Siddhant Nath, Special Olympics Bharat Athlete Leader, concluded the event with this question, “You too can learn a lot from me. We all teach and learn from each other. I am ready. Are you?”

The ESPN Recognition Presentation was the conclusion of a 2- day National Youth Summit led by Special Olympics Bharat National Youth Committee. The Youth Leaders led other attendees in a series of sessions on project management, Special Olympics, and activating the voice of athletes and leaders into a Unified Generation. Following the summit, Youth Leaders will take their ideas and projects of inclusion and implement them into their communities.

Since 2011, Special Olympics Bharat has been growing Unified Schools programming in more than 25 states. In partnership with Hasbro and the Stavros Niarchos Foundation, Special Olympics Bharat has been able to expand upon this work with over 90,000 schools becoming Unified Schools—sixteen of which are now recognized as Unified Champion Schools of Distinction.

ESPN is a proud sponsor of the Global Unified Champion Schools recognition program and the Global Presenting Sponsor of Unified Sports. ESPN is proud of its relationship with Special Olympics, which spans nearly 33 years. With support from ESPN and others, Special Olympics has grown this innovative and inclusive program to more than 1.6 million participants.

Achieving equality through sport in Serbia

‘Life is Easier When You Have a Team’: Special Olympics Brazil Unified Champion School Recognition